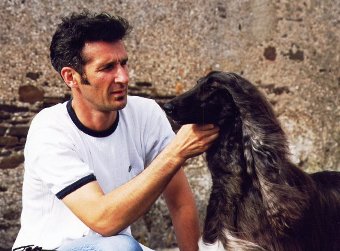 The story of 25 years of love affair with my Afghans…

Even I was fascinated by some images of these funny dogs since a long time, my first Afghan hound came in my life in 1985. After I had graduated and spent a year in Guyana, I started to work and dedicated my first pay to buy my first Afghan. I was looking for a white bitch and found her at Helene Bourcey’s kennel Koulangar. Her name was Aida de Koulangar. La Rochelle international show in 1986 was my first contact with the dog world. Later on, I showed her a few times without any success. Aida had an obvious potential for a great pet career! 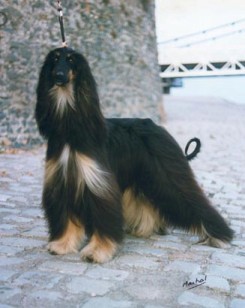 This kind of virus had definitevily occupied my body and soul and I began to search for a quality bitch. In 1987, I met an extraordinary woman, full of love and enthusiasm - Catherine Faget, the breeder of La Chapelle Saint Blaise. At that time she had just bred a very much awaited litter out of her famous champion bitch Dallas du Mocoloc out of the Danish champion Dur-I-Durrans Gazebo. Unfortunetely, she delivered only two puppies. One of them was meant to stay with Catherine and for the second puppy bitch, she had over twenty inquiries, mostly from experienced exhibitors. Catherine had to count on my determination, which was close to harassing, and so Chanel de la Chapelle Saint Blaise came into my life. This was also the beginning of long and respectful friendship with Catherine. Chanel started her brilliant show career all over Europe. Being only two years old, she won the famous FALAPA show over more than 100 bitches, won several BIS and foreign champion titles. Later Catherine entrusted me two more Afghans – Ch. Bayard de la Chapelle Saint Blaise and Ch. Evisa de la Chapelle Saint Blaise

As a young fancier, full of curiosity and enthusiasm, I fell in love with the pictures of a fascinating American dog – Ch. Pahlavi Puttin on the Ritz (Taco). I knocked his breeder’s door with an idea of buying one of his sons… Karen Wagner was as difficult to access as Catherine was easy ! ! ! My determination helped me once more and I met a very generous woman, who kindly shared her experience with me. She opened her door to me and I could meet Taco at home, who appeared to be even more impressive than at dog shows. Besides, seeing Taco and Karen together I understood what a perfect osmosis between a dog and his owner means. In 1989, Karen entrusted me a young brindle dog, double Taco grandson, who would become Ch. Pahlavi Zeni Int’l Intrigue. Boz was not a perfect dog, but he carried a new and very interesting gene pool. 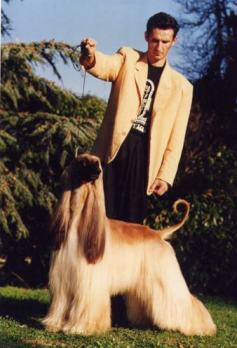 In 1991, I decided to make a next step and bred my first litter. After a consultation with Catherine and Karen, I decided to breed Chanel to Boz. Chanel was a very popular bitch, but I was not a recognized breeder, so i had many difficulties to sell the litter. Only two bitches went to show home, including the charismatic champion Glorieuse Intrigue du Menuel Galopin. Gigi started her career with several BIS wins. A few months later, she visited Karen in USA and became the first French bred Afghan bitch to become American champion. The highlight of her career was a BOB win at the World Dog Show in Bern in 1994 over 250 Afghans. Being four years old, she had already achieved a legendary career and retired just after winning the FALAPA BIS in 1995. 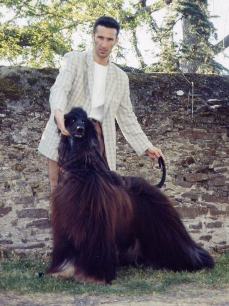 Meanwhile I met Birthe Ronnow Petersen from Denmark. She was the owner of Chanel’s father. She has remained my best friend in Afghan world through the years… Birthe initiated me to a type of Afghans that she knew very well, the Scandinavian type. One year after Chanel’s first litter, I bred her to Birthe’s champion dog Dur-I-Durrans Masquerade. This litter gave another historic champion dog – it was H’ le Viking du Menuel Galopin, who became European champion and was R.BIS winner at the European Dog Show in Luxembourg in 1996. In 1992, Birthe entrusted me her young puppy bitch Dur-I-Durrans Habanera, called Nera at home, who became a super star during her three years of stay in France. She had a litter, sired by her half brother Ch. H’le Viking du Menuel Galopin before going back to Denmark. That combination produced the famous quartet of champion bitches La Luna, La Bardot, Lady L. and Lulu L.

In the following litters I tried to keep a balance between American and Scandinavian lines. I got another dog from Karen, it was Pahlavi Jockey Silks. I used him twice and got five champions sired by him, including multi champions Jules and Janet du Menuel Galopin. When Jockey Silks was about 5 years old, he appeared to have some health problems and I decided to take him and his children out of my breeding. His son Jules had already sired a litter in 1997. After 1998, both Jockey Silks and Jules were not available for outside studs. Health has always been a selection priority… 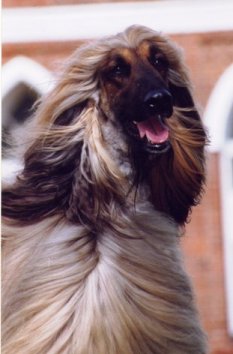 I knew that I will orientate my breeding to a more functional type and i focused on the Scandinavian lines (El Khyrias and Boxadan). Gigi’s two matings in 1996 and 1998 determined the future orientation of my breeding program. Gigi was bred first to the Danish champion Boxadan Double Trouble (Basti) and i got two essential pieces for the Menuel Galopin Puzzle: European champion Mario Boss du Menuel Galopin and European champion Marie France du Menuel Galopin. They both are omnipresent in my actual pedigrees. 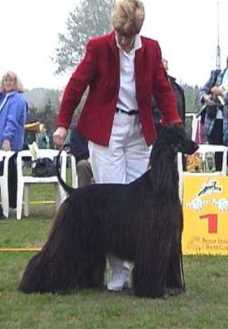 At the European Championship in Copenhagen in 1997, I fell in love with a Swedish champion El Khyrias Zcoop of The Year (Douglas) and decided to use him on Gigi a year after. From the litter of four puppies came the famous Ch. Orience, Ch. Odette and Ch. Olaf. I was satisfied with that litter and wanted even more… I had a great honour when the owners of Douglas offered me to keep him for a few months. Therefore, I decided to breed Marie France to him. From that litter came the very well known champions Parce Que and Paloma P. and the beautiful Primadona, who would actively participate in my future breeding program. 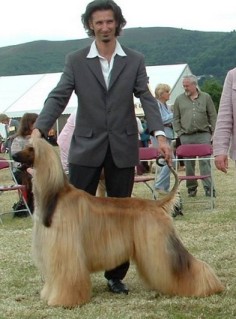 In 2000, my friend Kelly de Meijer (Serra Parecis in Holland) proposed me to own one of her bitches – Serra Parecis Don’t Forget To Look (Sherida). That bitch had never been shown and I didn’t know her personality. I loved so much her littermates and i took the opportunity to incorporate that line into my breeding. Sherida was a high quality Afghan and beside that, very complementary to my dogs. Bred to Ch. Mario Boss in 2000, she produced my champion bitch Regence du Menuel Galopin. Two years after, she had her second and last litter out of Ch. Olaf and this litter produced the champion dogs Thor, Tancrede and Tasso. 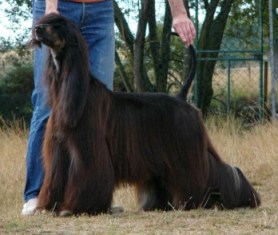 Back to Marie France: in 2001, I bred her to the Danish bred English champion Exxos Gameboy, who was quite similar to Douglas in type. This breeding gave champions Soliano, Sebastian and Sophie Marie. The year after, Marie had another litter by the Danish champion Exxos Guess My Secret. Khefren is a litter brother of Gameboy. Four of the seven puppies are champions at less than three years old. In 2003, Marie had her last litter with her litter brother Ch. Mario Boss. I got three puppies from that close combination and they all will be champions very soon. Marie France is a masterpiece in my breeding concept for the quality impact to her descendants and my attachment to her…

I am not very much a ‘pedigree person’. The priority is the complementarity of the sire and the dam and their morphotype and so my pedigrees are always built of the same dogs. I have to admit the omnipresence of Ch. Boxadan Xercice Makes Master in all the pedigrees of my dogs and his extraordinary producing abilities. He is a father of Douglas and Basti, a double grand father of Sherida and a grandfather of Khefren and Gameboy. These five Afghans are the only external elements, incorporated to my breeding program in the last 12 years.